The Dexcom CGM allows me to see my blood glucose level in close to real time on my phone. The advantages of this are HUGE!!!

So along with my insulin pump which I talked about in this post here, I also use a Continuous Glucose Monitor or CGM called a Dexcom G5. So what exactly does this piece of tech do? Well, instead of doing a finger prick to extract a small amount of blood from a finger which is then analysed by a machine to see what my blood glucose level is, I have a small filament sensor under the skin in my abdomen with a little computer chip connected to it. The computer chip detects the changes in glucose levels in the interstitial fluid under my skin and then sends those levels via Bluetooth to my cellphone where my blood glucose level is on display.

In the photo at the top of this post (yeah, ok… My level was a touch low, and had been running low for a while at the time of that photo… Hey. I’m not perfect!) the level is shown front and centre on the application’s main screen. At that point in time, there was a lot of red on the screen because my level is currently below a threshold that I set for myself. The other thing that is shown is an arrow on the ring around the current level. This shows how my current level is trending, or at least indicates what has been happening across the last reading or so. In the photo above the arrow pointing horizontally to the right of the screen shows that my level is not changing all that much. Other arrows indicate rises, falls, and rapid rises and falls. It will show yellow, rather than red within the screen when my level is above a threshold that I set for blood glucose levels that are too high. 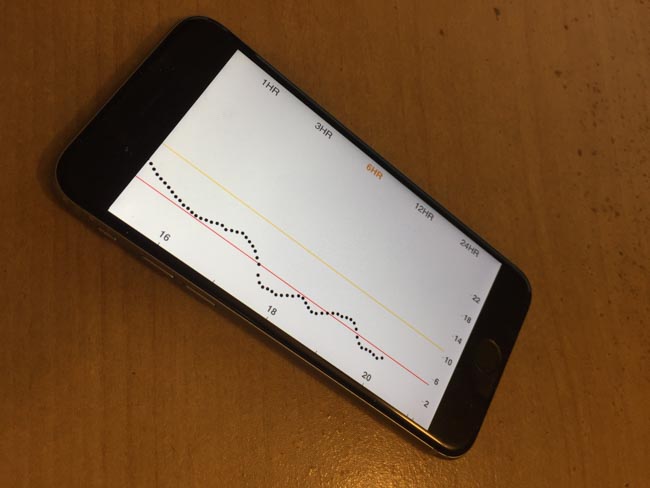 The image above shows what my blood glucose level had been doing for the 6 hours before this photo was taken. You can change the timescale from between 1 hour and 24 hours. This is really handy for reviewing a day and what impact things such as physical activity, meals and insulin have had on my blood glucose levels. The thresholds I’ve set within the application are shown as horizontal lines on the graph and in this image, you can see my blood glucose level has spent a fair amount of time in what I consider low levels.

And now for some techy-type things about the data and information I get out of this CGM. As long as my cellphone has internet access my blood glucose data is uploaded to the cloud and is available to my diabetes team at the hospital where they can review it. I can also upload from my insulin pump and my diabetes team can get the WHOLE picture of what is going on through a website https://diasend.com/ meaning there is plenty of information available so that I and my diabetes team can make informed decisions about changes in my treatment. There is another advantage to my data being in the cloud which I’ll talk about down this post a bit.

The CGM system has the handy feature of alarming when things are going bad. Which sometimes it does. I’ve mentioned how the application has configurable thresholds. Associated with these thresholds are alarms. My phone will start screaming like a banshee when my level is low and makes even more of a racket when my level drops below 3.1 mmol/L which is considered an “urgent low”. I get alerts from my phone when my level goes above my configured threshold or starts dropping too quickly. All of these alerts warn me that I need to see what is going on and potentially make some changes. When I train or race I sometimes change the thresholds so that I get warned of a low level at a slightly higher level than normal so I know I have to eat more food. Sometimes these alarms can be a bit much and I get a little pissed off at the noise. But it’s a matter of taking a deep breath and realising that they’re happening so that I can get better control of my diabetes. One of the catalysts for spending the money on the Dexcom CGM was that during a multi-lap race not too long before I started using the CGM my level had dropped very low and I hadn’t realised this. When I finished the race I wasn’t feeling very well so I did a finger prick to see what my level was and found it was below 3 mmol/L. During a race, I don’t like to see my blood glucose level drop below 6 mmol/L. What was scary about this was that I hadn’t actually felt low and if the race had been one lap longer or another 5 point something kilometres, I don’t think I would have made it and an ambulance probably would have been called for me. This was scary and now the CGM system will warn me of such things before it happens. It does mean I have to carry my phone with me during a ride or race, but this tradeoff is well worth it.

I mentioned that my blood glucose level is uploaded to the cloud. The really, really cool thing about this is that there is an application available for other people to download so that they can see my blood glucose level and receive alerts on their phone when my level has taken a turn for the worst. I have a very close friend who has this application on her phone and when my level goes below the urgent low threshold of 3.1 mmol/L her phone goes off. This is fantastic as while I have a flatmate I’m often the only one at home. I sometimes have low blood glucose levels in the middle of the night and there is the potential for me to not wake up for the low and slip into a hypoglycaemic coma. My friend is able to come to the rescue as she has a key to my house. This hasn’t happened but I have had a text from her before when her phone has alarmed asking what I’m doing. More often than not my response is something along the lines of “eating lollies!”

Adding to the tech-ness of the Dexcom CGM I use an Apple Watch and can see my blood glucose level and a smaller view of the graph with a glance at my wrist. This is handy for when it really isn’t suitable to pull out my phone or if my phone is in my backpack or in a pocket while I’m on the bike. 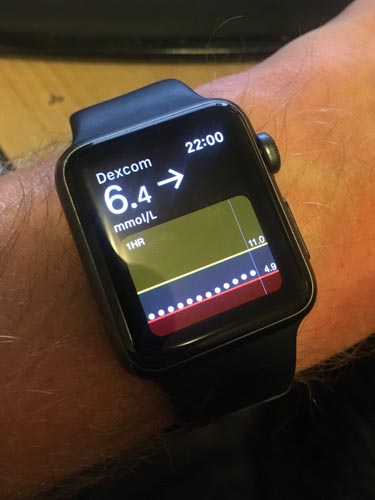 Finally a photo of the Dexcom CGM with a decent blood glucose level! 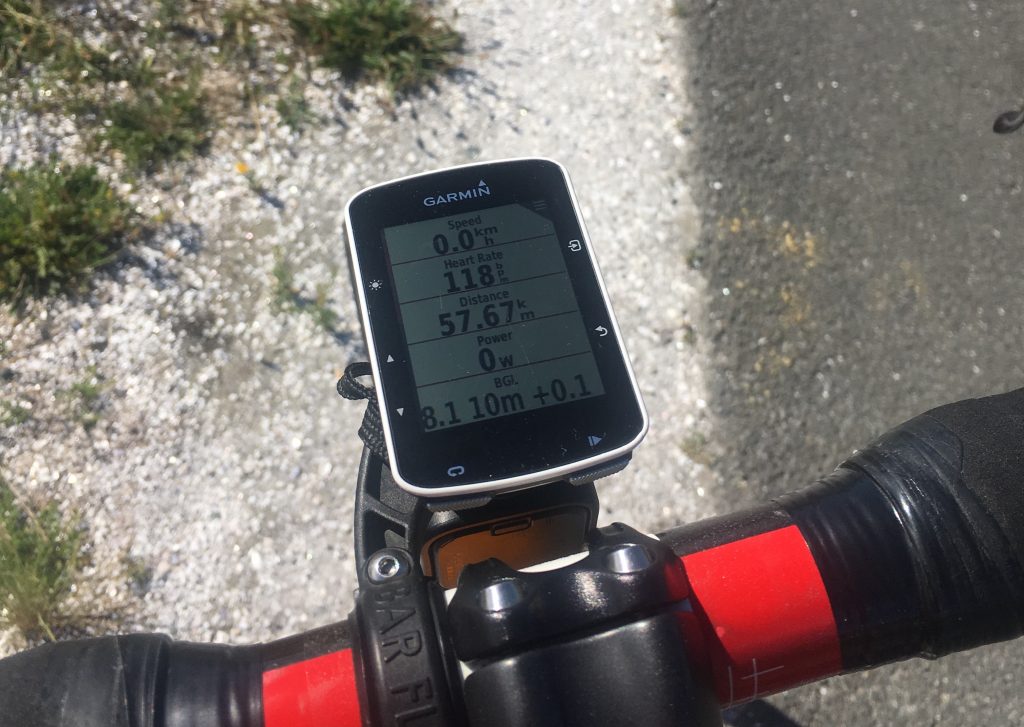 The blood glucose level is shown along with how old the reading is (there’s some time delay with this system) and what the difference was between this reading and the last.