This post continues on from the post 12 months ago, hastily made plans didn’t… go to plan – Part 1 where I wrote about taking on an Everesting challenge. To get the background on this post, please go back and read Part 1.

Sit back with a cup of coffee or a beer. This one’s a long one. I apologise!

So as I mentioned, things were going pretty well with the Everesting challenge. The control of my diabetes was going well with my blood glucose levels within an acceptable range for being on the bike. The homemade carbohydrate and electrolyte drink was doing its job at this point, and I’d even managed to record a short video for Facebook. You know… The type that all the fans want to see! …or just the few people who bothered to watch. It was uploaded pretty early in the morning after all.

After about three hours into the challenge, the sun came up. Well, it may have been behind a low cloud that brought misty drizzly rain with it, but I’m sure it was there. As such, it was time for a short break to change into some lighter clothing and change helmets so that I wasn’t carrying the weight of the big, bright light on my head. For a brief time, I considered stopping in the hope that the rain might stop, but I decided to keep going. My street wasn’t too bad in the wet, and I usually had no qualms about riding downhill on wet roads, just at a slightly slower pace. Besides, the show had to go on!

But shortly after resuming, possibly even on the first ride down the hill from my house, the whole challenge came to a halt. My street has a tight, narrow, blind and steep corner on it. Now, while I’m a stickler for staying in my lane on the bike (I’ll admit, there are times whereby accident I’ve drifted over the centre line) I will take the racing line through corners. The old “wide, inside wide” line, while still staying in my lane. It’s actually safer to ride that way and you have to brake less, which is often important. But in this instance, as I came around the corner and was maybe two-thirds of the way towards the centre line, there happened to be a rubbish truck coming up the hill. The rubbish truck was all the way over in its lane but was too wide for the lane and its front corner was over the centre line. In a split second, I imagined myself smashing into the corner of the truck so I did something which in hindsight may have been an accident, but may also be the same thing anyone else might have done in the same situation. I changed my line to swing a little wider through the corner and applied a little braking…

The corner where it went wrong. It doesn’t look steep, but it is! The gravel patch directly across from the camera is where I came to a stop after crashing

And that was where things went rapidly wrong. The roads were wet and a little slick. And before I could do anything about it, my rear wheel started sliding out from under me. It was never going to grip again. My front wheel then slipped out and I hit the road and slid. Thankfully in New Zealand, we drive on the left-hand side of the road and this was a right-hand turn, so I slid away from the truck. I came to a stop in a gravel patch on the side of the road.

At this point, I must state that what happened was no fault of the truck driver. It was just an unfortunate sequence of events that landed me on my butt. The truck driver stopped but I couldn’t accept his help. The social distancing rules of the time meant I shouldn’t let him near me.

Resting on the ground, I tried to calm myself down and take stock of what damage I’d done to the bike and myself. To be honest, I’m not sure which I checked first, Us cyclists are pretty concerned when it comes to crashing our bikes!

But when I tried to take my first decent breath I realised that the ribs on my right side were not in a good state at all. Now I’ve had rib injuries in the past, but they never felt this bad. Shit. They were going to take some time to heal. Next up was trying to get on to my feet. I quickly realised that my right leg wasn’t able to bear weight courtesy of some pain in my hip area. Also not good. Really not good. I looked up the street in the direction of my house and tried to take a step. It wasn’t going to happen. SHIT!

I was stuck there wondering what the hell to do and after some deliberation, I concluded that given I lived alone, it had to a call for an ambulance. So I made the call and a short while later an ambulance turned up. They got me in and strapped to a gurney and started to administer some pain medication. Which didn’t do a whole lot.

I was also a little worried about my bike. I asked if they would be able to take it the 400 or so meters up the street and put it in my garage, but they weren’t going to until they realised how light (and expensive!) the bike was. So a quick dash up the street (I was disappointed there were no sirens…) and the bike was dropped off before I was taken to the emergency department, feeling every bump on the road along the way.

I was sent for x-rays and CT scans which confirmed that I had indeed cracked a rib, but also: an undisplaced fracture of the greater trochanter of my right femur and two mildly/moderately displaced fractures of my pelvis. Below are the x-ray and scan which shows the fractures: 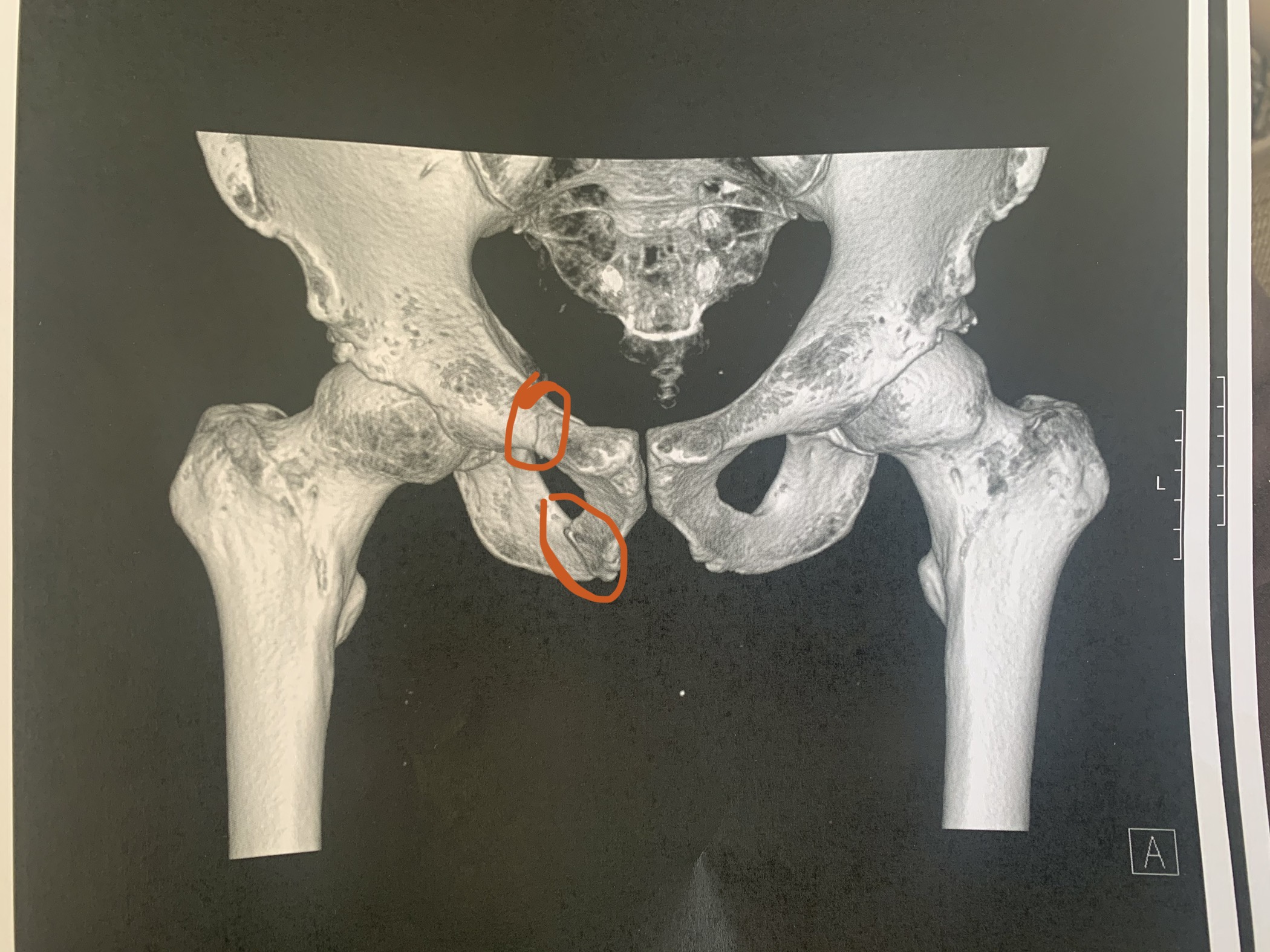 x-ray showing the undisplaced fracture of my right femur. It’s the dark line inside the red circle

(Just a small piece of advice… x-rays show soft tissue as well as bones. I had to craftily crop the x-ray to keep the blog content… tasteful)

While in the emergency department I made some phone calls to family and close friends. To be honest, there were tears. I was frustrated, disappointed, angry and a little scared of the injuries I’d sustained and how the hell I was going to recover from what to me at least, seemed like major, major injuries for a cyclist. Yes, I can hear people now who have read this, saying I know nothing of serious injuries. But these were the worst injuries I’d ever had from a cycling crash. To make matters worse, I was about to be discharged from the emergency department and sent home to a house where because of the coronavirus and resultant lockdown, I’d be doing day to day things by myself.

So I was handed some paperwork and bundled into a taxi for the trip home. This day was going to be one to remember for a long time and would leave its mark for sure. How the HELL was I going to recover from this in the long term and the short term?