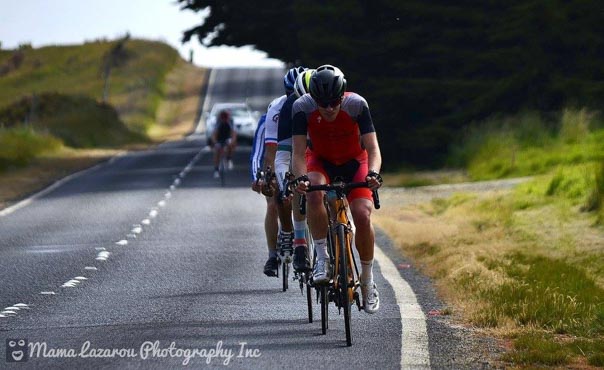 Somehow I ended up driving the pace of a small group for a bit in this race. But not for long. A hill was about to blow the race apart Photo credit: Mama Lazarou Photography

In my last post (Flashback: Wait… I have Diabetes? Well… damn. (Part 3)), I wrote about having eye surgeries as a result of poor control of my diabetes. I also mentioned how I went through some tough times about it. To be truthful, I understated how bad things got during and just after the eye surgeries. After the surgeon finished the last of four surgeries on the first eye to receive treatment I met someone through online dating and shortly a relationship started. Shortly after this, I had the first of three surgeries on my left eye. The relationship kept up through the surgeries and following recovery but for reasons unrelated to my diabetes or the surgeries the relationship ended. This combined with the impact of the surgeries and one or two other things going on in life was devastating. I ended up depressed and in reality I probably should have been on some form of medication. While I was still in a pretty unhappy way it eventuated that I would have to have a test to see if my peripheral vision was good enough for the New Zealand Transport Authority to allow me to keep my driver’s licence.

The result? No. Well… Shit.

I had suspected that this would be the case. But it still hit hard. Really hard. How the hell was I going to function without being able to drive? I mean, sure, there were people who by choice didn’t drive. But I felt it was different as I’d had flexibility and convenience just RIPPED away from my life. This just made things worse. It was a very long time before I felt better about things. I couldn’t help but feel that my diabetes and the complications it had introduced in my life had made me damaged goods. That was a tough mindset to break out of and it’s an easy one to slip back into still to this day.

During this period I decided I needed to write something in a Facebook group I’m a member of for people in New Zealand who have Type 1 Diabetes. At the risk of turning this post into a very long post, here’s what I wrote:

I’ve seen a number of people share memories on Facebook, and it seems to be a place where people sometimes reflect on what has been. So I thought I’d share here some musings. I guess I’m not entirely sure what I expect will come of posting this here. Maybe it’ll be helpful for some other diabetics, maybe it’ll serve as a wake-up call. Either way, I hope someone, or some people, get some value out of this.

So yesterday it ticked over 12 months since I had my first diabetes-related eye surgery. It’s been a rough 12 months where I’ve had 7 eye surgeries (although the eye specialist at the hospital even lost count, but I’m certain it’s 7). Four in my right eye and three in my left. Initially it was only going to be one surgery in each eye, however retinal detachments followed each surgery and my right eye needed some scar tissue removed from the retina, meaning another surgery.
This is not meant to be a woe-is-me post, but its been a roller coaster ride with a few low periods brought on by the eye surgeries and some low periods made worse by the surgeries.
As a result of the surgeries, my vision is not what it used to be, but I’m dead certain that it’s better than it would eventually turn out to be if I hadn’t had the surgeries. I’ve lost a lot of my peripheral vision and as a result I need to be assessed in regards to being able to drive. For now, walking and public transport has to suffice. I’ve been a competitive cyclist in the past, and I’m just getting back into riding my bike again. Small steps I guess.
At the root of all this is that I didn’t really look after myself that well in years gone by. As much as I try not to, it’s pretty easy to get into a rut where I dwell on what has been and put myself through the ringer for the actions that I now cannot change.
I guess this is where I think about how, if I could turn the clock back, I would most certainly try and be better with my diabetes…. I wouldn’t wish what I’ve been through on anyone.
I’ve had some people say that risks related with being a diabetic aren’t of concern to young diabetics. And I’d have to agree. But this isn’t right. How can we change this? No idea. But I know that there are some parents of Type 1’s on here. If I could say one thing… Please… Try and have your children have their diabetes under the best control possible. I know that sounds like I’m saying that like it can easily be done, but it’s not really about the here-and-now like kids often think life is. It’s about what can, and will, happen down the line. Years down the line.
I ended up getting funding for a pump just before I had my first eye surgery and started pumping a few days after my first eye surgery. Let me tell you that trying to learn how to fill pump cartridges and the like was somewhat challenging when your depth perception, and vision in general, isn’t the best!

In all seriousness, the pump has made my control so much better. I just wish I’d got on a pump sooner. It has dropped my Hba1c an amazing amount to the point where my endo and diabetes support specialist are happy.
If you or your Type 1 child are not on a pump, do everything you can to get on one.
Another thing I’ve found is that diabetes can be a bit of a lonely disease. While we’ve all found company through this social network, It’s easy to feel that it’s a bit of a solo struggle at times.
I’ve gone through some rough patches… Tried to do things by myself. Have been through a relationship breakup just recently (this whole post has a lot of personal stuff in it, but wow… That’s taken a bit to write in itself) where I’ve felt more alone than ever at times.
The thing is, all of that is just pure stubbornness, and well, I guess self-harming to a certain extent. You. Don’t. Have. To. Do. It. Alone. If you need help, find it. Diabetes can cause, and be impacted by, psychological issues. If you need help, talk to your GP, your endo, friends, family. Not just because you don’t have to deal with diabetes by yourself, but you shouldn’t.

I’m sorry that this has turned into a massive post. I guess I just wanted to pass on my experience. I intentionally haven’t expanded on some things. I’m more than happy to discuss things.I’ve been tryng to figure out a way to help other diabetics in order to do my best to prevent what happened to me from happening to others. Just not sure how I can go about it.

In addition, I followed up with:

While I said that you can go to your GP, endo, and others, make sure you are getting the support you need.
If your GP isn’t working out well enough for you, change to another.

I touched on how diabetes can cause and be impacted by psychological issues… Well, the last thing you want is to have what can already be a difficult life made worse by depression, anxiety or any other condition. I’ve experienced this first hand. You really need to do something about things before it gets out of hand. Your endo may be able to refer you for counselling or psychological help. You should ask. And don’t delay it by being stubborn and seeing it as a weakness. That’s not going to help yourself and your diabetes in the short, mid or long term.

Annnnd I think this post has ended up too long now. I’ll write one more post to bring things up to the here and now and finish this storyline off.